Who do you think you are?

The theme for my first workshop was Doctor Who as this is something i’m passionate about. We started off with introductions and one or two vocal warm ups followed by my own take Zip Zap Boing (Warp, sonic, exterminate!) which seemed to go down quite well, aswell as a few minutes of Hot-seating. The main part of my workshop was essentially script-work (i think i’d brought half the programme with me!) as i thought there were some great scenes and monologues that they could act out. The group showed great enthusiasm in their performances and it was a joy to watch. We then finished off the session with the game “answering a question with a question”. Thanks to all who attended great work!

Pictures at an Exhibition

Here’s my chance to comment on last week’s workshop from Peter Sebastian. Pictures at an Exhibition. It was great. Like he’d been curating art galleries all his life. After three intriguing warm up games with a twist,…(Fruit bowl will never be the same again) three small but beautifully formed groups set about making a picture and a short video on the theme of Space. 11 fiendish brains managed to dream up 3 very diverse takes on the topic, whilst being interviewed on why we were there… did I mention we were also Tate Gallery day trippers?
Space – The Final Front Room… well, whatever came out of it… it was a fab two hours. It got us thinking and acting with plenty of laughs along the way. Come back soon and bring us more workshop wonderment, Peter! 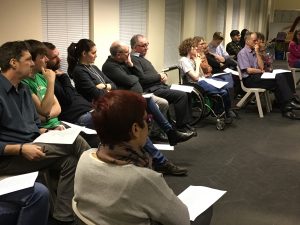 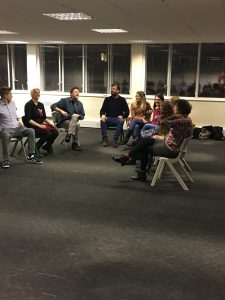 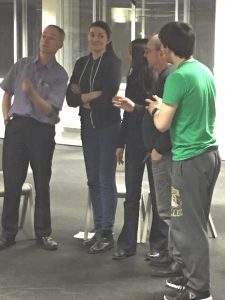 Thoroughly enjoyable evening, trying out different ways to deliver Shakespearean language, working with scripts, improvising scenes using various emotions and traits, such as jealousy, anger, deceit and vanity. Finally, looking at how crowds switch to a pack mentality and putting into practice in a couple of improvised scenes.

The improvised office scenes, where an individual spread rumours to each person in the room, was fascinating as we watched different people react to the news. Some very good and thoughtful acting.

The speech work was interesting as we listened to a wide variety of deliveries of the same speech come alive in different yet equally effective ways. These were created by firstly changing direction whilst walking on each punctuation mark, then stressing different words of each line “To BE or not to be” and “To be or NOT to be” etc

Finally we had a couple of short improvised scenes based on emotions, first prize had to be Frank/Saoirse/Peter/Oliver’s “Backstabbing” of Sean and I (very topical)

In this week’s workshop, Playing The Crowd, we looked at how a group of supporting actors – or in larger projects, extras – can add atmosphere and focus to a scene.

Using some dramatic moments from the work of Dickens, I found myself fascinated at times by simply “watching the watchers”. Simple, perhaps, but effective.

Teamwork obviously at the heart of it, and everyone contributed, adding intensity to the fun and interest.. As is so often the case, while concentrating on one idea or technique, other things got noticed , so for instance we worked a bit on spacing, timing and vocal economy…

These were two workshops based around awareness – developing self awareness as an actor, awareness of other actors you are working with and awareness of your character leading to a fuller more rounded performance.

The first week focused on self awareness and awareness of other actors so we got to know each other through some silly games moved onto reading monologues with another actor on stage staying silent and reacting to what we were saying.  This helps people to stay in character when other people have long speeches so they’re not just standing on stage looking bored! 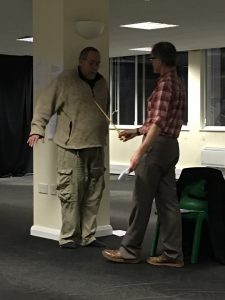 The second week focused on getting to know your character through various techniques.  Everyone chose a character they know well and introduced them to the group.  Then in small groups we went through a version of the Actor’s Questions and found out some interesting facts about the people in the room.  This led to all of the characters participating in some very random versions of Blind Date.

Both sessions ended with some bizarre and surreal improv.  I will never read Shakespeare’s Richard II in the same light again.

Thanks to everyone who came along and made it a fun two nights.  I hope people found it useful and will be able to use some of the techniques when performing in the future.

The format of the workshop followed the template established by Mark Freeman for the Jagger Street tales from over a year or so ago. I outlined seven scenes, organised people into groups to improvise and perform each scene

The storyline was about Voldemort Jagger, the last of the Jagger line going back in time to change the past, aka- Back to the Future, then accidentally going back to the age of the Dinosaurs. Then it got a bit more surreal with Raptors, T-Rex and Dinosaur-like people in the mix!

Thanks to everyone for making it an interesting night!