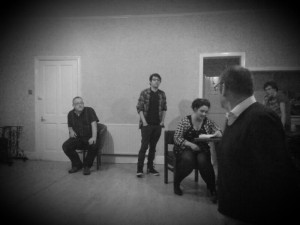 With less than two weeks to go until Network’s latest production, The Accrington Pals, Network’s dedicated Comms team, Will and Sandra, managed to catch up with busy director Andy Kerr, who was only too happy to whet our appetites for what seems sure to be another fantastic show.

So, Andy, what made you choose the play?

AK: To be honest, the play chose us. It seemed the perfect reflection of the values of the group and the social content is more relevant than ever. The characters are warm and strong and I feel everyone can relate to them. As soon as I read the synopsis, I felt it was something we simply had to do. And I also felt that we, as a company, were capable of doing it justice.

What has been the most rewarding aspect for you?

AK: The most rewarding aspect for any director is seeing the individual cast members become a genuine company. It happened so quickly with this cast. They are such talented and generous actors. There is no competition for attention (well, almost none – they are actors after all) and the atmosphere has been friendly and fun throughout. Yet at the same time, there has been no sign of false modesty. These are talented actors, who enjoy showing what they can do. It is always a magic moment when you first see the glimpse of what they are capable of. You may then lose sight of it for a rehearsal or two, but gradually it all comes together until you can spend half an hour just watching them with no need to direct anything. In fact, the only problem working with such talented, hard-working, beautiful people is that it will be my fault if it’s crap!

Have there been any particular challenges to overcome?

AK: Probably the short time scale. This isn’t so much a challenge for the actors, as I know they will all put the time in, but more of a headache when it comes to props and costumes and the general logistics of the show. Of course, I am feeling the pressure, but I can count on the support of an excellent team. If there is one thing that does keep me awake at night, though, it would be the time factor.

What can your audience expect and what will they take away from the play?

AK: It’s a topical play, as next year marks the 100th anniversary of the Battle of Somme. The play still feels very current even though the action takes place a century ago. I think everyone will feel the tragedy of the whole generation of lost youth. What makes Pals unique, however, is the focus on a northern mill town and the lives of the women left behind. Of course, we see the male characters at the front as soldiers, but they are no more important than the women, which is refreshing and powerful.

Audiences will shed some tears as they get to know and love the characters and experience their personal tragedies, but in the end not all the women have a grim fate. They are able to work, make decisions and genuinely change society, which had been impossible before. Throw in some Coronation Street-style, northern cobbles humour and you have a genuinely enjoyable and moving piece, which does not seek to be overly worthy. The play is very much a product of when it was written, the early 80s, when the first Thatcher government had just been elected. In the play, the character of Tom symbolises a communitarianism, in contrast to May and her Thatcherist individualism. Tom’s wartime experiences reinforce his belief in the group as an entity and the contribution we can all make to it, where May believes in making your own luck and looking after number one. It is the genius of the writer that ensures that both characters are likeable.

A word on the set and costumes?

AK: The set is fairly minimal and audiences will need to use their imagination. This was a deliberate directorial choice; minimal set means fast scene changes and a rapid pace can be maintained throughout the piece, in keeping with the extremely natural dialogue. There will of course be enough period references for authenticity. So I would describe our production as stylised staging but naturalistic presentation of the subject matter.

You have been a Networker for a long time now, Andy. Could you share some of your highlights?

AK: My Uncle Vanya was boss! Why? Because I did it! Sonia Chapman and I are the unstoppable duo, like the Catholic monarchs of Spain. As for Network today, I am delighted that the workshops have really taken off again. I think a major plus is our incredibly broad age range. Too many amateur theatre groups are either youth clubs or full of older people. We have a mix of generations, at the risk of sounding like an old fart! This bodes well for the future of the company.

I have so many great memories. I remember the Assistant Stage Manager for Uncle Vanya a few years ago saying: “none of them is bad. Usually at least one cast member is, but not one of yours!” He was amazed, but that just sums us up for me.

And of course, we have our annual summer tour of the parks, with a Shakespeare play or a show like this year’s Easy Virtue. I remember when our summer tour first started many years ago. It was a Midsummer Night’s Dream. And of course, I was Andrew Aguecheek in Twelfth Night at Sudley – they had to change all the references from thin to fat! Lastly, I’ll never forget an Ideal Husband in Reynold’s Park in a storm. Robbie O’Neill, who is now a professional actor in London, was in the middle of a speech. We had wrapped the chaise longue in cellophane, to keep it dry. Suddenly, it came loose and he had to deliver his lines accompanied by a 20-foot sale wafting in his face!

Thanks, Andy, and good luck with the show! We can’t wait to see it.