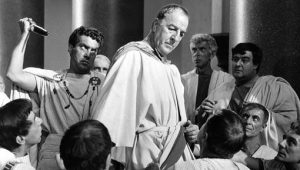 Liverpool Network Theatre are pleased to announce their Summer 2018 production will be Julius Caesar. Directed by Sean Gaffney, with the assistance of Rob Steele, and Mark Davoren as Producer, the show is expected to be one of the most successful to date.

Following the sell-out performances of their most recent show, No Exit, staged at The Casa in February, Julius Caesar will be performed at five venues around the city in June and July.

Asked recently about his initial plans, Gaffney said: ‘We are very excited to be able to bring this classic Shakespearean historical piece to Liverpool as it not only commentates on a world changing event, but also reflects the current political landscape, particularly in America, and closer to home with Brexit.

‘So many themes run through this play: envy; jealousy; ambition; honour; and patriotism – something for everyone to feast on.’

Shakespeare’s 21st play – written in 1599 – shows that people are swayed by a good orator but not always for what is good, as good and bad, right and wrong, are put on trial in the hard-hitting historical play that is…

Prior to Auditions, we will be holding a Shakespeare workshop on Tuesday 20th February at 7pm. Hope Street Limited above Specsavers on Lord St (4th floor) Entrance lies between MacDonald’s and Specsavers.