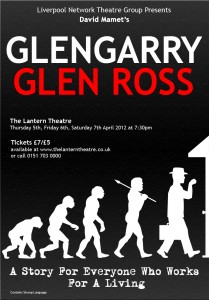 In Chicago, 1983, four real-estate agents have been forced into a sales competition to save their jobs. He who closes the most deals and makes the most profit wins a Cadillac, second prize is a set of steak knives. The two remaining will be fired.

What each of these men need to succeed is the good ‘leads’ – the clients most likely to buy. But only those who close the most deals get the good leads.

Tensions run high in this cut-throat sales competition, and these men are desperate…

no images were found